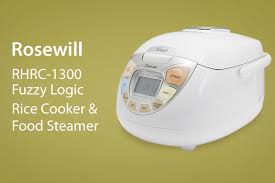 Fuzzy-logic rice cooker, a high tech rice cooker, consists of computer chips that directly make proper adjustments to cooking time and temperature.  Unlike basic rice cookers, which complete tasks in a single-minded, mechanical manner.  The process behind the fuzzy-logic rice cookers needs a bit more explanation which I’m not prepared to explain its detail here.  The fuzzy sets theory was first proposed by UC Berkeley professor Lotfi Zadeh in 1965.

Fuzzy logic is basically a way to program machines in a more human way.  The use of fuzzy logic in rice cookers helps to ensure properly cooked rice because it gives the appliances the ability to make judgement calls similar to those a person might make, albeit typically better than those a hungry, impatient person might make.